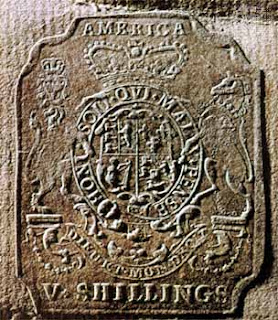 On February 6th, 1765, George Grenville proposed the Stamp Bill before Parliament.  The bill was passed on February 17th (hey that would be today) and was passed by the House of Lords on March 8th.  Nearly two weeks later, the King ordered the bill into effect.  Since the national debt in Great Britain was 129 million pounds in 1764.  The British had accumulated this huge debt because of its military actions during the French and Indian War.  The British citizens would revolt if they were taxed any more - especially for a war that did not even occur on their land.

The Stamp Act was just one of several acts passed by the British government in an attempt to raise money to pay their rising debts.  The Stamp Act was passed on March 22, 1765 and required the colonists to pay a tax on every piece of printed paper.  A stamp was not like a postage stamp, but more like an embossed or raised stamp (think about a  notary republic and the stamp they make).  There were over 50 different taxes on the paper of every kind.  "for every skin or piece of vellum, or parchment, or sheet or piece of paper, one which shall be engrossed, written, or printed, any declaration plea, replication. rejoinder, demurrer or other pleading of any copy thereof; in any court of law within the British colonies and plantation American, a stamp duty of three pence."


The money collected by the Stamp Act was used to pay for the military campaigns in the Appalachian mountains.  Mostly these acts were passed to raise funds to pay for the French and Indian War.  What made the colonists angry was that they were not asked about the tax being placed upon them.  If the colonists allowed it to go through, they feared Britain would think they'd be able to pass any law without their consent. Of course there were many colonists - the Loyalists - who accepted the Act without fighting back. 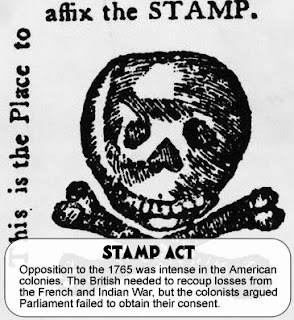 Of course if you refused to pay the Stamp Act tax, you would be brought before the Vice Admiralty Court. These courts had no juries and yet could decide matters in the British colonies.  They usually just dealt with maritime affairs, having to do with the sea.  The judges were appointed by the king, so they sided with the king and were not impartial at all. The colonists knew this.

Patrick Henry wrote the Stamp Act Resolves - which stated the Americans had the same rights as the English - that taxation without their representation was wrong.  They should only pay taxes they voted on in the House of Burgesses or other local assemblies.  Four of Patrick Henry's resolves were adopted by the House.  Of course, in response to the resolves, Governor Fauquier dissolved the House of Burgesses.


The Sons of Liberty formed as a result of the Stamp Act. Not only that, but on October 7, 1765, the Stamp Act Congress met in New York City. Twenty-seven delegates from 9 colonies gathered to discuss the situation.  They were lawyers, clergymen, journalists, and businessmen who wanted to send a message to the Crown. More would have attended if there had been time to travel the distance.  As it was, the 14 Point Declaration of Rights and Grievances was written with the help of John Dickinson.  If this sounds a lot like the Continental Congress and the Declaration of Independence, it is.  It became the precursor to what would create our country.  The only difference - while this declaration enumerated why these taxes could only be passed by colonial assemblies, it ended with the men stating their loyalty to the king.

"That it is inseparably essential to the freedoms of the people, and the undoubted right of Englishmen, that no taxes be imposed on them but with their own consent, given personally or by their representatives."

Many colonists rioted in response to the taxes.  They wanted to frighten the tax agents into backing down.  Shopkeepers refused to sell British goods as a result.

On March 17, 1766, the Stamp Act was repealed.  Unfortunately, the Declaratory Act was passed as a result.  This new act said that Great Britain was the boss of the colonies and had ultimate power.

The colonists were incensed.

Welcome!! I developed this site after being part of the CWTI (The Colonial Williamsburg Teacher Institute). If you get a chance, go to their site and apply! It was the most rewarding experience of my teaching life.
I was inspired to share what I learned and what I have learned since with my students and others. I hope you enjoy it.
Mrs. Hoffman

If you are a fan of American History (which of course you are, or you would not be here!), then you have to try this new game!!!
A dear friend who attended the CWTI with me last, year, Liz, told me about it and she is right - it is AWESOME!!
The name of the site is Mission US. Just click on it and have fun with the American Revolution!!
www.mission-us.org

Great Books to Enhance Your Love of History